The volume of investment in commercial property in Portugal was in 2016 the second highest of any year ever, at around €1.3 billion, and could rise to €2 billion this year, according to the Portugal unit of property consultants Cushman & Wakefield.

At a presentation in Lisbon of C&W’s 2016 results and the outlook for 2017, the managing director for Portugal, Eric van Leuven, said he saw investment in property - that is, purchases to secure income - surging again after “a start of the year like we’ve never seen”. 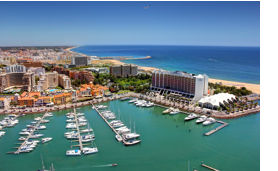 Some big deals that were expected to be completed in 2016 were delayed, and so are set to be booked this year, he said, adding that this should help 2017 beat the 2015 total of €1.9 billion - which is the highest ever.

According to the figures presented, the average value of transaction for investment was €31 million, “slightly below the level of last year”, which van Leuven suggested reflected a “pause” on the part of investors following the Brexit decision in the UK.

“I’d like to believe that it wasn’t the business cycle,” he said.

Van Leuven noted that Portugal-based investors accounted for 18 percent of the total volume of investment, a relatively high proportion.

By segment, the inflow went above all into office space (48 percent), where the 600 million euros invested was the highest annual total ever. Retail represented 45 percent and industrial property just three percent.

The relatively high values of the Portuguese market - as represented by record low yields - are justified, van Leuven said, by “investors’ confidence in the country”.

Buyers clearly believe that values can rise further, in the form of higher rents.

Risks for the future are above all in the level of interest rates; higher rates would probably send many investors out of property and into financial assets.